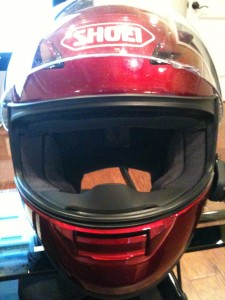 So last week I faced a dilemma. The annual FJR EOM event in Cumberland Falls, KY was coming up at the end of the week (I’ll post later on that) and I was into my gear preparations. My good ole Shoei X-11’s liner needed a wash in a really bad way, so I removed the liner, filled the sink with some warm water mixed with shampoo, and dunked the liner in….it literally came apart in my hands! Well, that wasn’t good…it was only 2 days until kickstand up time and I wasn’t about to do a 500+ mile trip in a helmet with a deteriorated liner. The reality was that my X-11 was nearly 7 years old, the furthest extent of the warranty, and it was probably not the safest helmet at that age. A liner could have probably been had from an online retailer with ultra-expensive overnight shipping, but it didn’t make much sense given the helmet’s age. So I decided to bite the bullet and get a new helmet.

I had originally been thinking about getting a Shoei Qwest, mainly due to the good reviews and glowing reports from fellow riders, but when I arrived at Cycle Gear the next night after wok, my choices were limited. I was intent on getting a Shoei since my head seems perfect for their shape, but they were out of any Qwest helmets in my XL size. That’s when the sales clerk suggested that I look at the RF-1100, a helmet that wasn’t that much more expensive than the $319 Qwest, but one that included a removable liner. I was rather impressed with the knowledge the sales person displayed when pointing out all of the differences between the Qwest and RF-1100…I was basically getting a lot more helmet…something I already knew, but it was nice to hear a salesperson with some real knowledge for once! The XL size fit me perfectly; very snug and comfortable with no readily apparent potential hot spot areas. After much deliberation, trying on, attempted rip-offs (pulling helmet off head while strapped on), and moaning and groaning about the expense (the RF-1100 retails over $400 at Cycle Gear), the sales guy cut me a great deal and found a single, unopened and untouched, XL solid red RF-1100 that “almost” matched the wineberry color of my FJR. The helmet had a beautiful luster to it; okay, no graphics, but that really wasn’t a concern in my mind. I walked out the door with the helmet having spent $376 total…yep, cheaper than many online places have it. Cycle Gear treated me right!

I’ll cut to the chase or else this mini-review will drone on endlessly, lol. In a nutshell, I’ve found the Shoei RF-1100 to be a fantastic helmet! I am basing my experience on nearly a week of riding with the helmet now, a week that includes a few 8-12 hour days of riding (EOM) and a lot of rain.

First off, the helmet has built-in plastic pockets designed for speakers. My Sena SMH-10 speakers, large as they are, fit perfectly using Sena’s velcro attachments. I couldn’t use the Sena in my X-11 without causing severe ear pain from the speakers after a few hours of them touching my ears, and in fact, my Sena set remained on the desk at home throughout the summer. 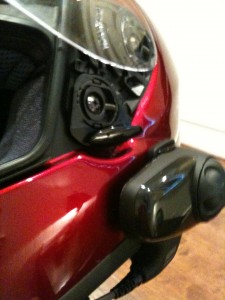 With the RF-1100, the thick Sena speakers do not touch my ears at all and the speaker cups appeared to be placed perfectly for optimum sound quality, even when I’m wearing my usual foamy ear plugs. At speed, I have absolutely no trouble hearing music. The clamp mount of the Sena worked out just fine; it sits just under the visor lock lever which can cause a bit of fumbling around until you get used to it.

Interior Comfort, Weight, & The View
The interior of the RF-1100 is plush! The material is very soft to the skin and non-irritating; I found it to be quite pleasant. It smells like a new car at the moment, but I’m sure with a few more hot days, that’ll change, lol. The cheek pads are firm and exert firm pressure on my cheeks, this is exactly how my X-11 was and how I prefer it. The pads are interchangeable with different sizes if you don’t like the fit, a handy feature! The chin strap is padded well and doesn’t irritate my neck in the slightest. The strap seems a bit longer than it was in my X-11, but the excess snaps up out of the way nicely.

The RF-1100 comes with a chin curtain and breath guard that you install yourself. I installed both in my helmet. I never used the chin curtain in my X-11 because it had a tendency to fall out or get in the way, but I haven’t found that to be the case with the RF-1100; it’s stayed in place and really doesn’t get in the way….plus it really helps cut the wind noise down. I suspect I’ll enjoy the chin curtain in the winter. The breath guard is ok and seem functional enough; however, I’ve never had much luck with them preventing fogging. In fact, the RF-1100 is VERY quick to fog if you leave the visor closed when stopping at a light. Luckily, the RF-1100 has a great visor closure system that has a very positive “fog vent” position that works very well. Of course, the drawback to the small sliver of venting is increased noise.

After a week of ownership and several very long rides, the helmet has been completely comfortable and shown no signs of hotspots or irritation of any kind. I’m very happy with it. The helmet’s weight seems to be much better than my already light X-11 and the view out of the helmet is excellent in my opinion. The viewport seems to be quite a bit bigger than that of my old X-11.

Noise and Flow
Speaking of noise, the RF-1100 is actually relatively quiet for me as compared to my old X-11. When you open the vents, which I’ll cover in a bit, or have the visor cracked open, it is pretty noisy, but not in a spectacular sense. I was still able to hear my music at speed without any problems. I suspect it’d be quite a bit noisier without the chin curtain, but I haven’t tested that. When the vents and visor are fully closed, it really is a quiet helmet. It was almost eery silence at times, depending on what position my windscreen was in. Pretty cool. Turning my head in the airstream caused no undue movements or pressure; it was rather sedate even with the Sena Bluetooth unit hanging off the side. With my adjustable windscreen, it’s quite easy to play around with the different heights and find a setting that’s super smooth and quiet.

You can just make out one of the Sena’s speakers installed.

Venting
I’ve read a few reviews that weren’t particular impressed with the venting of the RF-1100; however, my experience has been quite different. I was completely impressed with the venting! I should qualify that in that I’m talking about the upper vents…the chin vent IS disappointing in performance, but that might have something to do with my windscreen. The upper vents, when open, let the air flow across the top of my head in a way that my X-11 never did…and that was a helmet that had good venting! When you slide open a front vent at speed, there is absolutely no missing the fact that air is spilling in…it’s that nice! The vents themselves are a bit fiddly and can be a guessing game when on the road, but once you get used to them, it’s ok. There’s 2 forward vents and 4 rear vents; no idea why there are 4 rear vents, but they work. When the vents are closed, the helmet’s noise levels are very low, but when the vents are open, the noise levels go up quite a bit. Additionally, the front vents are pretty much full circles open to the wind stream and there’s nothing shielding them from the occasional bug getting in. I learned this while rolling down the road with the vents open…I felt a creepy crawly on my scalp after passing through a cluster, lol. It’s annoying to have a bug crawling around up there, but I’d rather take that risk and have the excellent venting of the RF-1100! Going back to the chin vent for a moment; it has detents for each position, but I really noticed no difference one way or the other. I don’t feel any air from the chin vent unless I hold up my hand in front of the vent, blocking the air entrance.

Weather Ability
In the short week that I’ve had the Shoei RF-1100, I’ve traveled several thousand miles and was in a day-long deluge heading to EOM in Cumberland Falls, KY. During that deluge, or any of the rain storms in the following days, the RF-1100 didn’t leak a drop, even with the “city vent” visor setting. There is a very substantial angled gasket running around the viewpoint of the helmet and it apparently does an awesome job. The neat visor closure mechanism goes a long was towards helping with the visor’s seal. I was throughly impressed! The vents, when closed, did not leak a drop either. My old X-11 was pretty good with this too, but the viewport gasket was nowhere near as effective and generally leaked. I never had to touch the visor to clear rain from it as a turn of the head using did the trick.

The Final Word
Seeing as how I wore my X-11 for 6.9 years, I’m not a huge connoisseur of motorcycle headgear and I think many riders are like that; once you find a great fitting helmet, you stick with it. The Shoei RF-1100 has so far been up to the challenge of taking the old X-11’s spot in cradling my brain case. I’m very impressed with the helmet and happy to have it! If you have a Shoei head and are looking for a new helmet, my advice is to check out the RF-1100 before looking at anything else…I think you’ll be impressed.