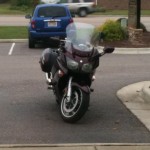 My FJR's just waiting for 5pm to roll around.

It’s just like the old days when I was in the Corps…commuting by motorcycle again. Over the past year, I’ve ridden into work on occasion, but in the past month, it’s become a pretty much full time deal since we parted ways with my wife’s car to save a little money. Mind you, I’m not complaining…we still have one car left and yet I choose to take Feej into work even when my wife doesn’t need the car. The weather’s cold and/or rainy, but it doesn’t really matter…I’ll still ride. I can’t quite put my finger on it, but the feeling is similar to what I felt in those early commuting times…I feel compelled to disavow the car and just ride. Yes, the FJR is a machine that tends to suck you in and keep you for itself, it’s just that good. I’m not delusional though; if the weather is bad enough, i.e. ice on road, I’ll park my butt in the car and take the boring way into the office. But the allure of riding and the gas sipping yet powerful ways of the FJR add up to a very addictive concoction.

I suppose I’m fortunate in some ways; I don’t deal with much, if any, traffic for most of the 15-20 mile ride in to work and the majority of the ride winds its way through the countryside. There’s the occasional farm tractor chugging down the road to the next field or the cellphone-stuck-to-ear driver that forgets to hold the accelerator pedal down, but otherwise, the only real danger from traffic comes when I enter the “city” of Wilson each morning, where no one seems willing to show their manners on left turns…especially those parents delivering their children to school at one particular intersection. It’s a sad fact of life for a modern day motorcyclist that distracted and impatient 4 wheeled motorists are the single greatest danger on the road today. I need some fender LEDs to present a triangle of light…that catches the eye.

When I leave the office and head for home, I often find myself going into “wander mode”, seeking out the longest way home. My GPS track history looks like a child’s coloring book…blue track scribbles all over the small area between the office and home. There’s no rhyme or reason behind such behavior, it’s just the “thrill of the hunt” as it were…seeking out a little piece of road that brings a smile to my face. There’s not much in the way of hills around this area, so finding a curvy piece of road threading itself between farm fields or around a lake is something to cherish.

I’ll be honest, I’m not looking forward to the 30 degree days heading our way soon, but I’ll deal with them as they come. The large Vstream windscreen and the winter-adjusted fairing winglets help, but there’s no denying that it gets damn cold during a ride in those conditions…mostly in my hands. I’m hoping that at some point, the finances will be around to facilitate a heated vest or jacket liner, plus some heated glove liners (already have decent, slightly large winter riding gloves perfectly suited for liners). In the meantime though, a silk balaclava and glove liners will have to do the job, but they can only hold off the cold for so long. When bundled up like the Michelin man, controlling the motorcycle becomes more of an exercise, taking a toll on situational awareness in the process. That’s a recipe for trouble in my book and having heated gear will greatly reduce that factor.

Just a quick note in these cold days; I’m VERY thankful for my Pinlock-equipped helmet visor as it allows me to close all my helmet vents and keep the visor down while keeping the cold out…without any fogging in my field of view. Motorcyclists around the world have dealt with fogging forever and it seems the Pinlock system has finally found a real way to defeat it. I can’t tell you how nice it is to keep the visor sealed up without having to crack it open in a freezing wind chill to defog.