Spring is creeping in…

Well, finally, spring is beginning to roll into the Eastern NC area with temperatures that go from freezing to 75+ degrees; these are the fun times for weather forecasters, lol. It matters not, I’m still riding around, to and from work, and the occasional weekend blast when I’m not pegged on home chores. My most recent long distance run occurred the weekend before last when I decided to do a day trip to the Uwharrie National Forest, located between Troy, NC and Ablemarle, NC. I had planned to wake up early that Saturday morning, allowing me plenty of time to explore the Uwharrie area…but it was not to be. I woke up at 10am…not exactly an early riser’s ideal time, lol (thanks to Netflix and my urge to watch Prince of Persia at 1am). Undeterred, I got myself cleaned up and hit the road.

I’m not going to bother retracing my route as I rarely do that on any of my day rides…besides, this isn’t a “formal” ride report, merely an example of spring-like day riding, lol. The temperature when I left was in the low 50’s and was expected to peak somewhere in the 60’s, but I wasn’t too concerned…it was way warmer than my usual 30 degree morning commutes. My target to start was Troy, NC, around 145-155 miles from home base as Google Maps flies; my miles would be a bit more as I would be avoiding the highways for the most part. That being said, I hit US64 into Raleigh for the first stretch as I’ve ridden just about all of the roads between Raleigh and Rocky Mount and was looking for new ground…quickly. I hit Raleigh and then departed south/southwest on two laners all the way to Troy, with a stop or two for lollygagging purposes.

NC 27 through Troy and west towards Ablemarle was less interesting than I thought it was going to be, considering the “foothills”, but I eventually turned north on a little road just past Lake Tillery and found myself coming up on the entrance to Morrow Mountain State Park; I turned in to see what was to be found there. Well, for one, the roads were all 25mph, but it wasn’t bad at all and was actually a nice little ride through some pretty terrain. There’s not much of a road network there, but I eventually wended my way up what I figured was Morrow Mountain and found a hangout full of bikes and cages! 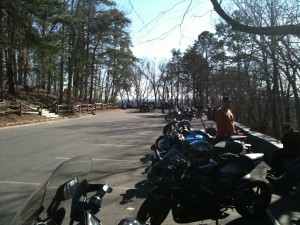 I found a herd up here!

For not really being among the Smokies proper, Mount Morrow offered some pretty nice views, especially since the trees were still in winter hibernation mode; I imagine this place looks pretty nice during the warmer months and I’ll definitely have to return. Anyway, there was a fleet of bikes up there, ranging from Harleys and squid cycles (extended swingarms) to Ducs and Beemers…and of course my Feej. Reminded me a lot of the parking lot at the Dragon. After sitting around for awhile, listening to a couple of guys trying to figure out if I had a Beemer or something else (they eventually spied the Yamaha tuning forks on the tank), eating a snack, and downing some water, I moved on. That was an interesting place and hopefully one that I can get my wife to accompany me on sometime soon.

Once I left Morrow Mountain, things started to blur a bit; daylight was getting short and I still had a lot to check out before departing the area. It basically came down to seeing all of the squiggly roads you see on Google Maps when looking up Uwharrie National Forest. I didn’t get to all of them before the daylight waned, but I managed a fair number of them….I grinned and giggled a lot…if that’s any indication to you as to how nice it was to hit twisties, lol. Once it got late enough, I headed for home. The path home, much like the trip there, consisted of two laners all the way back to Raleigh (not the same roads mind you) and then another jaunt on US64 in Raleigh to shoot back to Rocky Mount…stopping off about halfway back to grab a bite to eat.

Not a bad day's work!

By the time I rolled up to the garage, it was well after dark, but still a rather warm 62 degrees. The GPS logged 349 total miles for the day and I actually felt pretty good! Not bad work for waking up late I think, lol.

Observations from the trip? Hmm, well, there are a lot of fine little roads over in that general area; I found some real nice sweepers and tight turns not too far out of Troy. That whole area has some nice roads and I really didn’t have much trouble with gravel even with the high number of gravel drives I encountered. I’d never been to that area before, but it’s definitely one I’ll return to soon. It’s only a couple of hours away from the house and a great alternative to the mountains if time doesn’t permit. Feej performed flawlessly, as usual, and delivered an excellent ride! If you’re ever blowing through NC on the way to or on the way from the mountains, and you’re relatively close to the area, I’d recommend a detour…you’ll be pleasantly surprised!