So I had a leaky roof…

Earlier this week, I noticed some water stains showing up in the ceiling. We just went through Hurricane Irene here and the town was hit particularly hard, so I figured perhaps there was some damage that I had missed during my inspection a couple of weeks ago. Upon inspecting the attic and roof, I found no visible holes…I chalked it up to hurricane force winds forcing water into spots it doesn’t normally go.

Fast forward to last night, we had a rain storm. I decided that, to be sure, I’d go into the attic and see if there’s any visible leakage. The attic is like a cathedral, so walking around and inspecting things isn’t so hard; I found no leakage over or around the area where the water stains were (yes, I know water travels too). From there, I decided to inspect the entire roof from the attic, just to be sure there were no unnoticed problems. When I reached the front portion of the attic, it caught my eye….the steady stream of water pouring in as if someone had partially opened a faucet. Luckily, the leak looked like it was over the soffet area and didn’t pose an immediate risk; there wasn’t much I could do about it anyway since it was pouring rain outside.

Today, I decided to get up on the roof and find the source of the leak I saw last night. Our roof is VERY steeply pitched, so this is no small task. When I inspected the roof from the relative safety of a ladder, I noticed something peculiar…there was what looked like a small piece of copper tubing stuck into the roof in the area of the leak. I grabbed a pair of pliers and yanked it out. It was a BULLET! 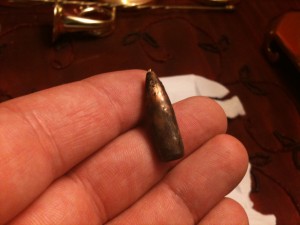 It only damaged a roof, but imagine if it found something soft and squishy...

Heh, imagine that. Well, this is Rocky Mount and people do shoot their guns in the air. Luckily, the roof was just thick enough to stop it, but not before it managed to punch through just enough to let the water get in. From the look of it, it reminds me a lot of a 7.62 NATO round. Anyway, word to the wise, if you hear gun fire in your neighborhood, go stand under the thickest part of your roof! 😀