So earlier, I had mentioned my preferences for commuting and followed it up by remarking about my cold hands. Well, I’ve started taking steps to remedy that situation by purchasing a Symtec Heated Grip Kit; these should help greatly. They’ll be used in conjunction with some Suzuki V-Strom hand guards, which haven’t arrived yet. Yes, Suzuki parts on a Yamaha, but it’s common knowledge among many FJR riders that these hand guards are the cat’s meow on an FJR in cold weather, especially when used with heated grips. 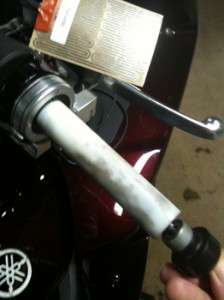 Throttle side grip with Brakeaway throttle lock and Symtec element.

Installing the Symtec kit onto the handlebars was actually relatively easy. I used the air compressor to slide the grips off (complete with Grip Puppies still in place) and then cleaned each bar with some solvent to remove any crud. Opinions vary, but since the clutch side bar is aluminum, many folks recommend putting heat shrink tubing on it to serve as an insulator for the warming elements (the throttle side has the plastic throttle tube to provide insulation). Since the Symtec’s pump more power to the clutch side to compensate for the heatsink effect of the aluminum bar, I opted to go without any heat shrink material on the tube…could bite me in the butt later on, but since I couldn’t find any appropriately sized heat shrink around town, I pressed on.

Installing each wrap was fairly simple, making sure there weren’t any air bubbles under the mylar material (air gaps can create hot spots and burn out). For the throttle side, I positioned the cable so that it exits towards the front of the grip at the 3 o’clock position, allowing enough slack for throttle movement (approximately 90 degrees of twist). For the clutch side, the wire exits at 9 o’clock and passes through the switch box (I milled out a channel for the cable to pass through). Both wires then travel down the bars and meet up as they cross the front cowling support brace and pass into the dash. Re-installing the old grips was also painless; I coated the heating elements with grip glue and slid each grip back on using the air compressor…super easy. I provided some strain relief for the throttle side heated element by using a zip tie to secure the wire coming out from underneath the grip to the rubber flange of the grip (yes, you have to poke holes in the grip and feed a zip tie through). Both grips are now tight and secure on the bars; can’t wait to test the heaters out!

The installation of the Symtec’s has led to somewhat bigger project…installing a barrier strip. Why? I already have a GPS wired in up front and a Battery Tender Cable; the wire mess around the battery will only grow larger with the Symtec’s installed, so now’s the time to get things straightened out and neat. A barrier strip is simply a centralized power distribution block, remote from the battery area, that allows one to plug in a number of accessories without having to string large amounts of wire all over the place. There are all-in-one solutions out there, but the barrier strip is cheap and just as effective. I also purchased a cheap 12v 30a relay to use in conjunction with the barrier strip; the relay will feed power to the strip only when the key is on in order to prevent inadvertent battery drain. This barrier strip is rather small, but then it’s only powering a couple of items, so no biggie. I’ll probably end up installing another one under the seat in the future.

Installation is still underway, but so far I have mounted the barrier strip on the rear external surface of the glove box in the left console using some velcro, which makes it easy to pop out and add/remove accessory wires. The relay will be positioned in front of the glovebox and be either free floating in a void or mounted to the glovebox itself…still debating that one. 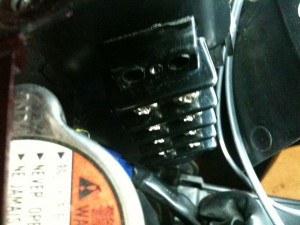 Barrier strip velcro'd to the back, external surface of the FJR's glovebox.

The relay’s power and strip’s ground, will be fed by two 12 gauge wires run from the battery; the hot wire has an inline fuse rated for 25 AMPS close to the battery. The trigger wire for the relay will feed off the glovebox’s cigarette plug wiring, which is live only while the key is on. The ground will simply go to the battery’s negative pole. The barrier strip itself will be jumpered half and half, allowing one half to be hot with the other half being ground. That’s the plan as it sits right now. Stand by for more as this project proceeds!