Okay, I was slow in getting this final report on Project Hothands in, but here it is finally… The day after starting this project, I was able to complete it and have been running the grips for a couple of weeks now. Look below my report for an update.

It was a late night in the garage, but I managed to complete “Project Hothands” successfully! When I last left you on this project, I had wires everywhere and was preparing to wire in the barrier strip and relay. I picked up where I left off and set about getting the wiring finalized and in place. I sized and cut the wiring and began the process of mounting the wires to the barrier strip, which is equipped with a split jumper allowing hot and ground to exist at opposite ends of the strip. When it came time to get the relay hooked up, I struggled for a good while trying to get my hands into the void ahead of the glovebox to get a tap around the glovebox cigarette lighter hot wire. With a few magical curse words, I eventually slipped the tap on, inserted a trigger wire, and clamped the tap closed…yay! With that out of the way, I proceeded to hook up all the contacts on the relay and link it to the barrier strip. With everything in place, it was time to hook up the battery, pop in the 25amp fuse on the feeder line, and try it out. 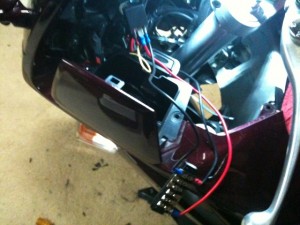 The barrier strip and relay, hooked up and tested! Note the jumpers on the strip allowing both hot and ground.

Success! With everything hooked up, I turned the key and my tester revealed power reaching the barrier strip. Turned the key off and power to the strip ceased…exactly the goal. Once I was satisfied that nothing was shorting or out of place, I set about getting the relay mounted. I first wrapped the contacts sticking out of the bottom with electrical tape as a precaution and then, using heavy duty velcro, attached the relay to the front, inner angled surface of the glovebox. It fit securely with none of the wires touching anything, a great sign. I then proceeded to re-install the lower, inner fairing piece that I had removed earlier and then moved on to the finale!

With the relay in place, it was FINALLY time to hook up the Symtec’s to the barrier strip and switch. Everything proceeded reasonably well and I managed to get everything put back together and buttoned up. A final test confirmed that both the barrier strip and heated grips were performing as expected….the grips got HOT! The 3 position switch included with the Symtec kit appears to work reasonably well and should do the trick although I may upgrade it to a Heat Troller at some point. For now, though, it works. The placement of the switch is slightly off center in the blank panel, but it still looks pretty sweet…I’m figuring I could go further and throw in some LED lights beside the switch to counter the off-centered appearance. A task for another day… 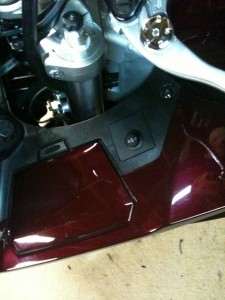 I’ve got some results from the heated grips, but let me add that a day later, I received my V-Strom hand guard kit from Sunnyside (FJRGoodies.com). The kit not only includes the guards themselves, but also all of the nuts, bolts, and washers you need. These went on without too much trouble although with the Brakeaway cruise control installed on the throttle side grip, I had to do quite a bit of trimming on the bottom inboard side of the hand guard to get it fitted correctly. In the end, it worked out great and looks good! With the hand guards and heated grips, I should be set!

Well, it’s been a couple of weeks since installing the relay, grips, and hand guards and I figured I needed to both get this 2nd part done and also report on my experience with these farkles. Overall, it was a great move! The grips get hot and keep my hands warm and the hand guards help by keeping the wind off my knuckles; I’ve ridden in 29 degree weather so far and have had no issues other than noting that perhaps a heated vest would be in order. I did do some minor re-wiring as my wife needed the GPS cable, that I was using, for her business trip…that allowed me to re-route the path the grip wiring takes from the handle bars and into the dash, giving me a bit more slack in the throttle-side grip wiring (it was ok before, but left little room to mess with the left-hand console panel). On a side note, during this re-wiring exercise, I replaced the GPS cable with a Powerlet plug mounted on the steering stem nut and some Powerlet Garmin cables run up to my GPS’ Aqua Box. It all worked out quite well in the end. I’d still like to refine my wiring even more as I’m still somewhat of a novice with electronic wiring, but that’ll make a nice project next summer when the garage is at a more workable temperature. 😉

In summary, if you’re looking for a cold hands solution on your FJR, I highly recommend getting both heated grips and the V-Strom hand guard kit. The combination will serve you well into the 30’s and, if you’re hardy, perhaps even colder. Heated gloves are probably still going to be needed if it gets colder as the tops of my hands still get cool, but for now, I’m a happy camper! 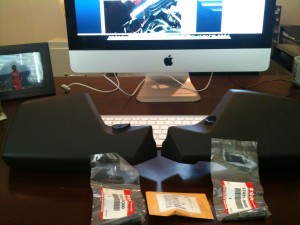 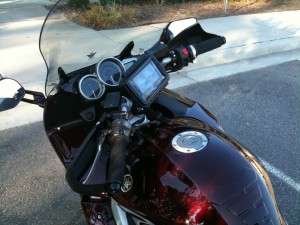