Journey to the High Country, Pt. 4

Welcome to Part 4 of my Colorado ride report! At the moment, in this trip, I’m holed up just north of Buena Vista, CO…let’s get the show on the road!

I woke up to a dusty campsite; the wind was blowing and dust was coating everything…almost as bad as some pollen I’d run into earlier in the trip. Like an archaeologist dusting off some ancient person’s skull, I lightly cleaned the bike of the little piles of sand, packed up, and beat it south into Buena Vista for some breakfast. I stopped in at The Branding Iron Bar and Grille and enjoyed this marvelous collection of calories…

After breakfast, with the morning sun beating down relentlessly on me in my one piece Stich, an old fella and his wife accosted me and started asking heaps of questions about my bike and the trip…he was an old BMW guy. It was fun talking to him, but eventually even his wife thought he was starting to ramble and tugged at his shoulder to go eat breakfast before it turned to lunch. By now, I just wanted to get rolling and get some cooling airflow…I was baking.

Back on Feej, I headed south and then east as US24 meandered around the map a bit. My rough plan was to move north (I wanted to visit Mt. Evans eventually) and knock it off a bit early to find a campsite where I could spend two days before the weekend crowd hit and sponged up all the sites. I had seen CO9 on the map and thought I’d have a look and see if it was interesting going north from US24 to Fairplay. It wasn’t; I could’ve saved a bit of time and just taken US285 up to Fairplay, but no use crying over it…I didn’t have a date or anything. CO9 up to Fairplay is largely flat, straight…and fast. When given lemons, make lemonade right? 😉

The scenery on CO9 changed considerably as I left Fairplay, traveling north, and got into the mountains again.

The road passes through Breckenridge, but first, one must cross Hoosier Pass (11,539′). 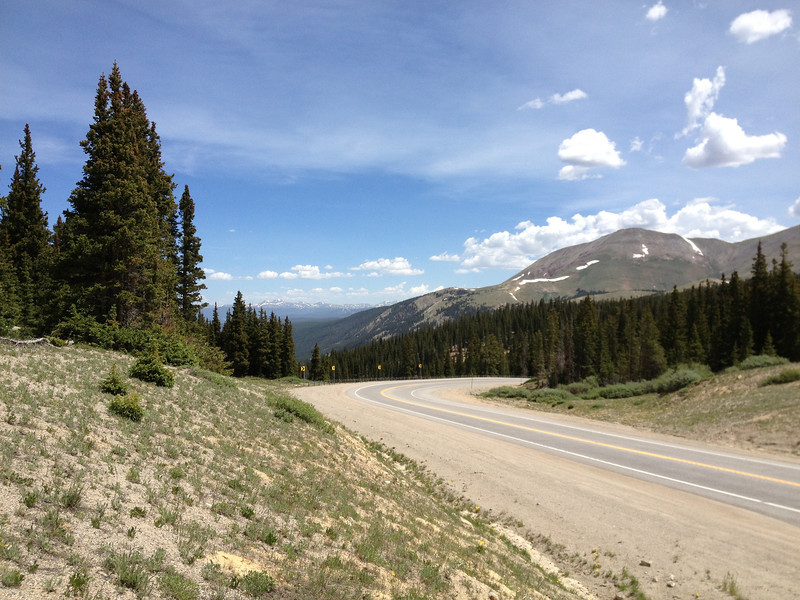 The summit of Hoosier…it seemed popular with bicyclists. The views were good…..and so were the views of the mountains. 😉 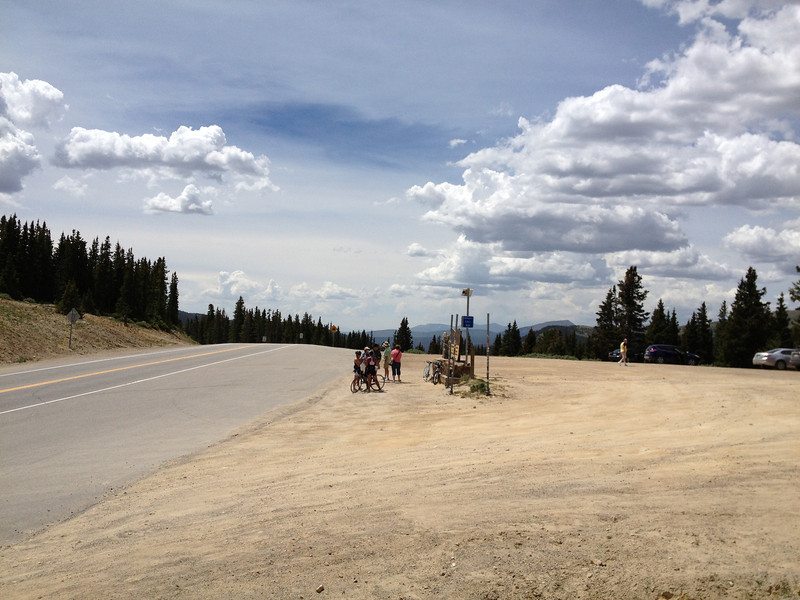 I descended Hoosier Pass and headed for Breckenridge; the road was a good ride, with plenty of excellent vistas and curves. I snapped a pic of the ski area and, as was my custom in hot, crowded ski towns, I kept rolling…

I continued on CO9 to Frisco, where I spent a bit of time looking for a campsite. It was here that the pine bark beetle seemed to wreak total destruction as the campgrounds located around Dillon Reservoir were almost completely stripped of trees, with only the stumps marking what was once there. It was a bit sad. Even with the lack of cover, the campsites were all full. There are still some beautiful vistas though…

With no apparent camping in the Frisco/Dillon area, I came upon US6 and turned east, deciding to head towards Georgetown. I knew this upcoming stretch of US6 from my past of living in the state and having been a professional truck driver…I knew it went over one of my favorite passes – Loveland Pass.

US6 winds its way past a couple of ski areas, on both sides, and serves as a bypass route for trucks hauling oversized or hazardous cargo since they’re not allowed through Eisenhower Tunnel normally. It’s not a long road, but it climbs to a summit of 11,990′ on a well-maintained ribbon of asphalt that’s not too heavily traveled and equipped with nice, long passing zones. The views are spectacular, especially looking down the valley eastward, where I-70 comes up to enter Eisenhower Tunnel. Switchbacks are few, but sweepers are plentiful…it’s an awesome little stretch of road for a bike. I ended up blowing some time here as I ran the pass a few times for giggles…especially since traffic was pretty much non-existant on it.

Heading up Loveland Pass from the west….

Looking back to the west…

It snakes its way up…

Made it… If you look closely, you’ll see I-70 down in the valley below as it makes for Eisenhower Tunnel.

US6 makes its way down the east side in a beautiful collection of sweepers, with a few hairpins…the near horizontal cut near the bottom is I-70.

A glance back at the west side…a few pics ago, you could see the stepping of the road as it climbed. That was a fun stretch to run a few times. 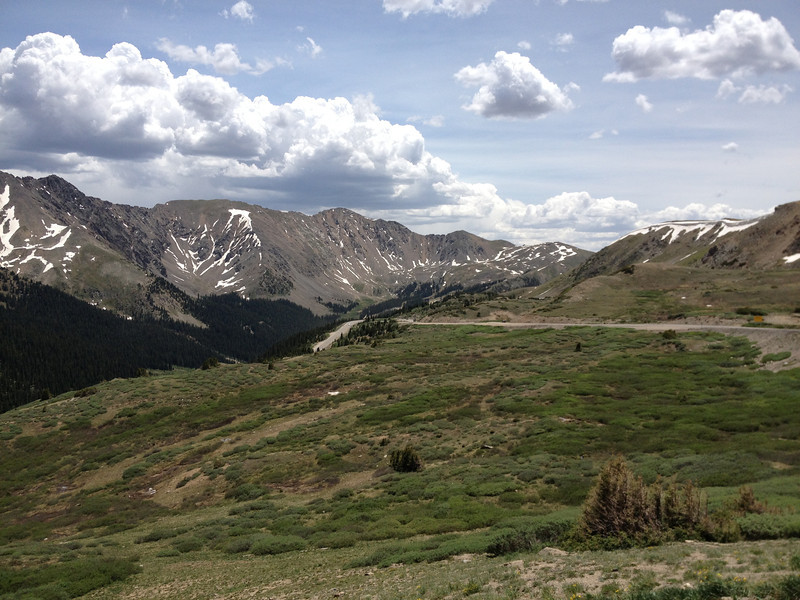 Looking south off the summit.

And of course, a bit of bike pr0n… 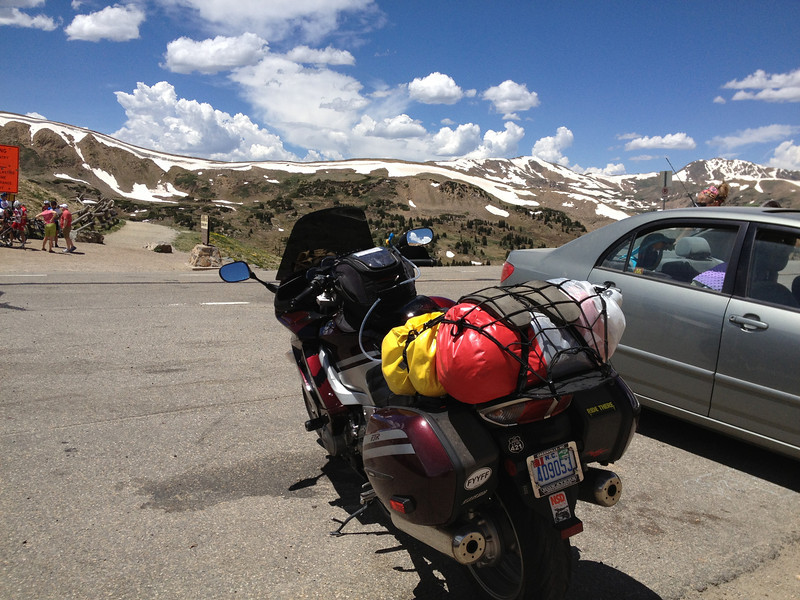 I’d end up back here again tomorrow while on my little “rest break”, lol…this road is too much fun!

I hopped on the slab and ran I-70 down to Georgetown at a brisk pace, making a brief detour to check out Silver Plume…it’s touristy, but it didn’t pique my interest and so I finished getting myself into Georgetown. Georgetown’s a neat little historic town shoved into a steep valley and bordering I-70. At the west end of town is the Guanella Pass Road, a road that steeply climbs up the mountains butted up against Georgetown and heads to Grant, CO with some beautiful asphalt and then dirt. I followed the road for a number of miles, checking the campgrounds that dotted the road. Even though it was barely mid-afternoon, everything was full. With that, I decided to head back to Georgetown and see about finding a hotel, eventually finding the local Super 8 to have a vacancy…and low rates  (I had good luck with Super 8’s on this trip). I’d be staying here for two nights to chill…it is my vacation after all.

I felt a smidge guilty about hanging it up early, but then again, I hammered Loveland Pass a few times and had a blast doing it. That’s what it’s all about.

That evening, I walked towards downtown Georgetown for some food, but along the way, I found the Mountainbuzz Cafe & Pizzeria and decided that it would do the trick. Ordered up an 8″ pizza and a beer. I went out to the front deck to have a seat and wait. Holding my beer, I slid my chair back a bit to get more comfortable, not realizing that behind me, the deck dropped 10″ to a lower level. One of the chair legs went over the edge, taking me with it in a flail of arms and legs. I ended up on my back with debris all over the place…my right forearm taking a pretty nasty bang along a table leg in the process, BUT I DID NOT SPILL MY BEER…those cat-like reflexes, lol. I picked myself up off the ground, dusted off, and tried to play it off as best as I could with the few other patrons there…I’m sure I failed, lol. My arm hurt like a bitch, but there was no blood or broken bones, so it was all good (it’d make an appearance later).

The pizza arrived….mmm. It was awesome!

I wasn’t too sure what I’d be doing on my “rest day” tomorrow, but I’m sure it involved riding…

Today was going to be my “light duty day”…kinda. I checked Google Maps and found a Yamaha dealership over in Dillon, so I decided to run over there and see what they had. I also wanted to pick up a fresh can of Plexus after nearly emptying my current can having to clean huge bugs off my visor many times a day on this trip so far (beetle size, lol).

For the run over to Dillon, I decided to just burn west on I-70 and honk the horn in Eisenhower Tunnel along the way, yes, I’m nerdy like that. The dealership was called Silverthorne Power Sports and was small, but they had a single can of Plexus left on the shelf and seemed like nice folks. No sport touring machines…didn’t expect any, but they had plenty of ATVs and 2-wheeled off road conveyances.

After leaving the dealer, I had time on my hands, so I decided to follow CO9 north up to Kremmling. I’d been through Kremmling earlier in the trip after leaving Winter Park, but had never driven or ridden 9, so I wanted to see how it was. Turns out it was fairly sedate.

CO9 between Dillon and Kremmling. 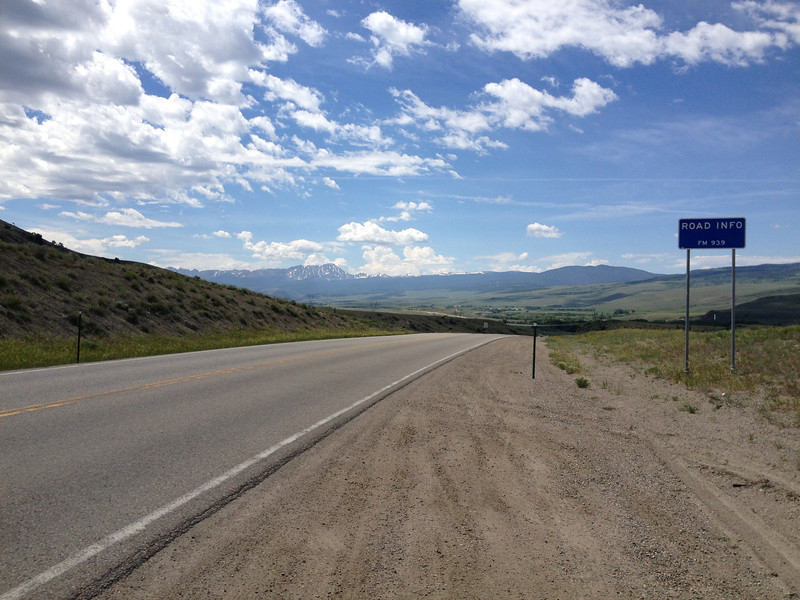 I reached Kremmling and stopped in at the Kum ‘n Go for a Mountain Dew and Snickers bar. While there, 3 retired Army officers pulled in, 2 on BMW’s and one on a big scooter…the scooter driver had a peg leg and swore he’d have a bike if he could figure out the shifter with his peg, lol. All were cool as hell and on a long road trip together. Wish I’d gotten a picture; they were some cool cats. After they departed, I headed back south on CO9, with the intention of going back to Georgetown and perhaps, perish the thought, playing tourist for the afternoon.

As I was heading down CO9, I spied a paved road shooting off to the east, into the hills, that I hadn’t noticed on my way up. My day riding tendencies kicked in and I tested out the ABS as I decelerated hard and turned onto the road marked as Ute Pass Road. It looked promising and turned out to be quite a fun little curvy road…and I had it all to myself!

Heading up Ute Pass Road…you can see the road curving around the mountain in the distance. 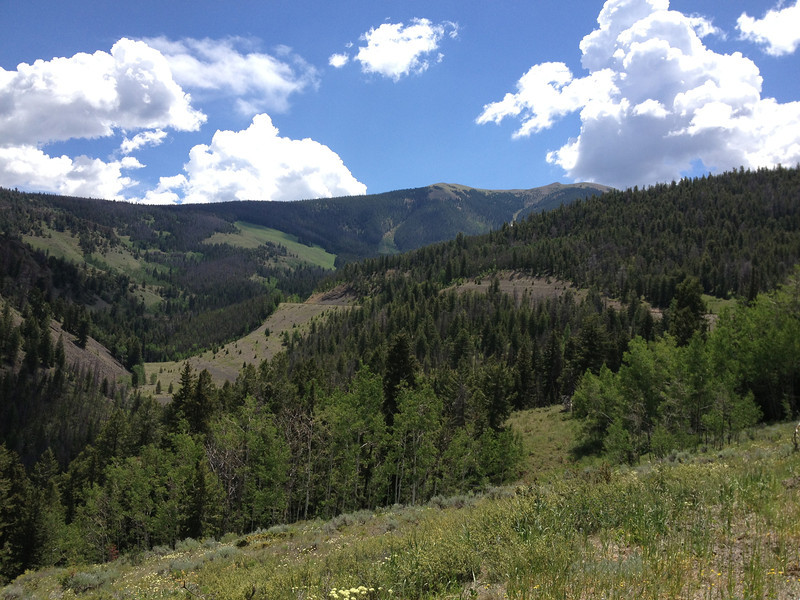 The road makes a gentle, curvy climb up into the lower hills.

The road eventually crested at a tree-covered summit and quickly drops you down into a small valley…and the Henderson Mill. The Henderson Mill sits at the tail end of a 15 mile, elevated conveyor belt…the longest of its type in the world, that passes under the Continental Divide via an old train tunnel to the molybdenum mine at the other end, in Empire, CO.

Henderson Mill, with that elevated conveyor belt heading off to the right. 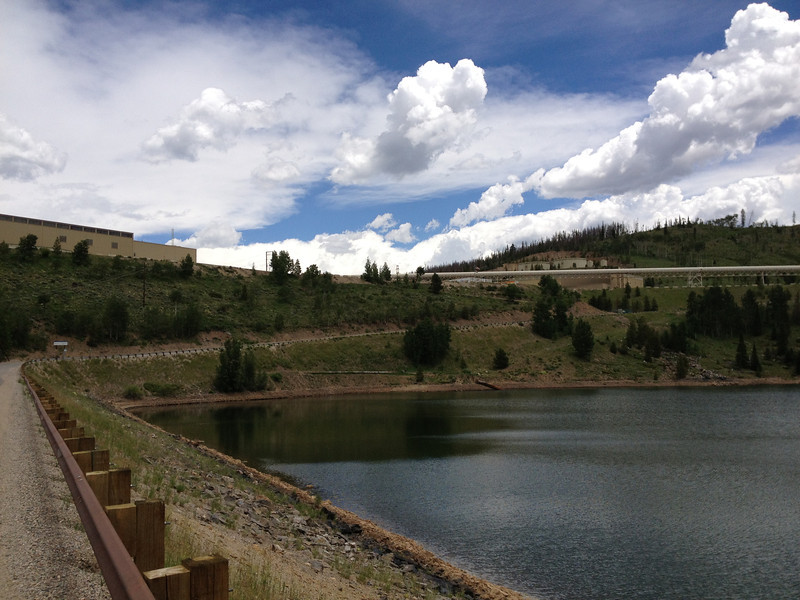 The conveyor belt continues off into the distance, past the reservoir on site. It’s painted green to blend in.

Around the mill looks like fun for something other than a heavy street bike. Beetle kill is evident in the little peak on the right.

A little past the mill, the road turns to dirt and splits, with one road going towards Granby and the other, in worse shape, heading towards Fraser…both places I’d been to earlier in the trip. I followed it towards Granby for a bit, then turned around. 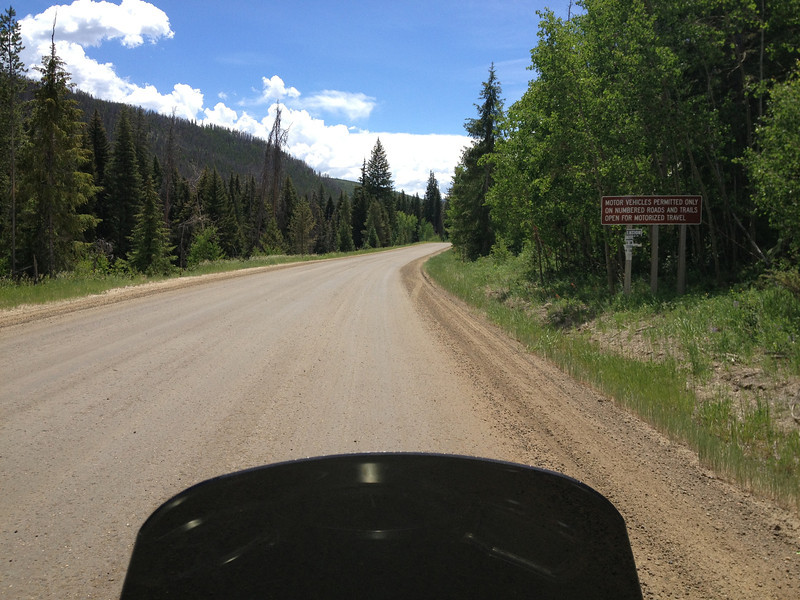 Heading back down Ute Pass Road towards CO9. 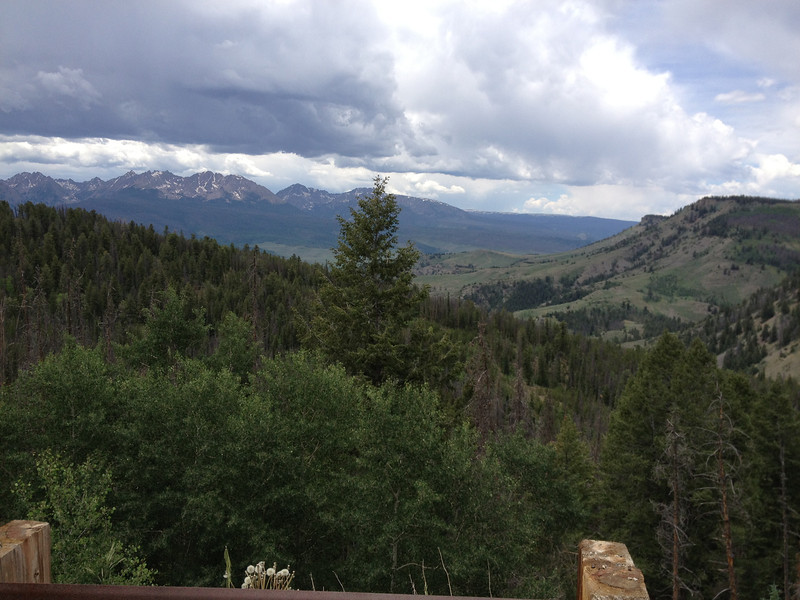 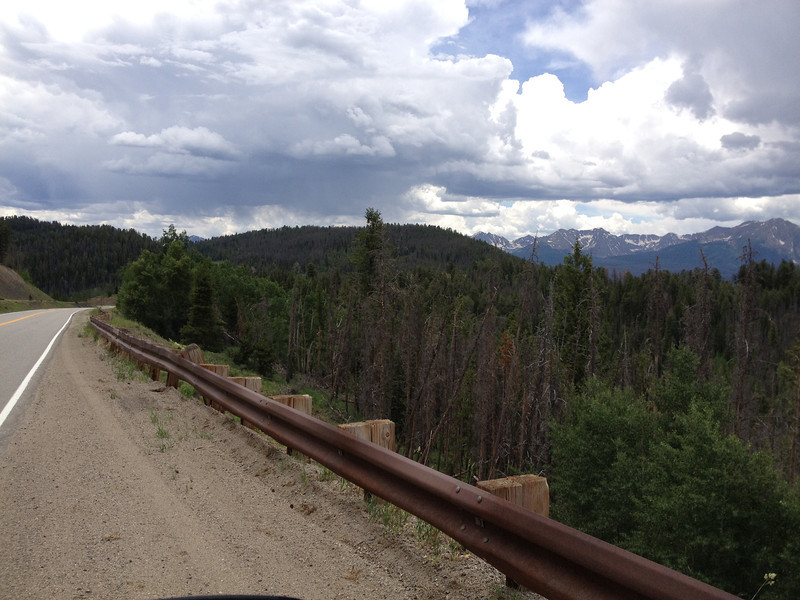 I got back down to Dillon and headed towards Georgetown, but temptation beckoned and I decided to hit Loveland Pass a few more times while it was trying to rain… 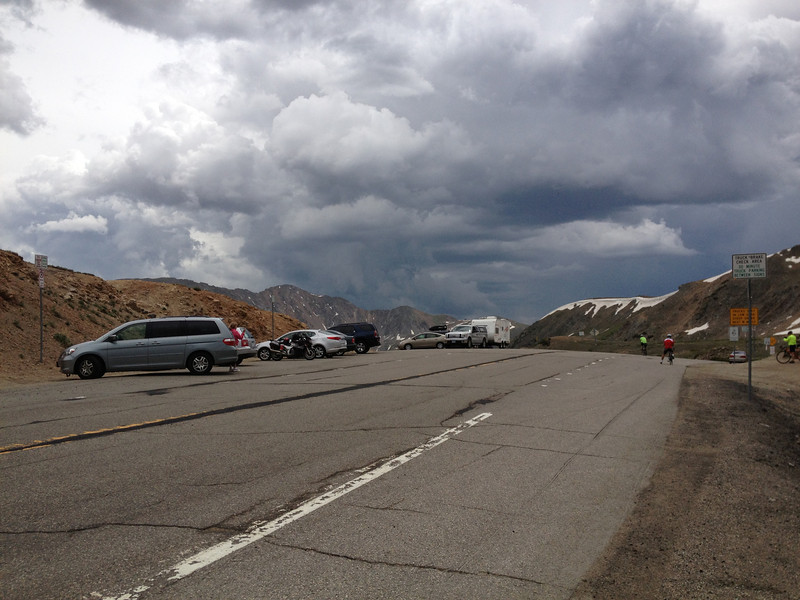 I finally got back to Georgetown and tracked down a burger and a beer in town, then called it a day.

A bit of Georgetown and it’s historic buildings….pretty crummy photo taking on my part in town actually, lol.

After enjoying a massive burger and a beer, I sauntered back to the Super 8 and spent the evening shooting the bull with an old crusty ex-Harley-rider-on-a-Victory that was in the room next to mine…that guy could tell jokes like nobody’s business. It was a slow day, a rest day, but the riding wasn’t that bad. Mt. Evans was on tap for tomorrow….should be a fun ride!