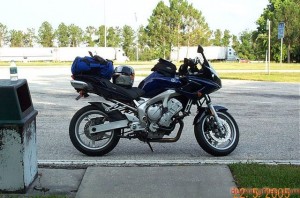 This page contains information on my old FZ6 and where it’s gone and what I did with it over the few years I owned it. The bike is a 2004 Yamaha FZ6; it’s a 600cc bike that is technically considered a sport bike. My views on this bike are not based on a technical analysis, but rather my general overall experience…YMMV. The style of riding on this bike is somewhat different than your typical sport bike as you’re not hunched over near as much as you would be on a “crotch rocket”. The power of this bike, while great at lower revs, really resides on the north side of 7k rpm…once you get past that point, it’s like uncorking a rocket ship. The relatively low cost of this machine makes it a great choice. The short clutch engagement and powerful engine can make this bike a challenge for newbies, but it’s not impossible.

One of the first add-on’s any motorcyclist should add is frame sliders, especially if your bike has fairings. Frame sliders mount on either side of the bike, usually at a strong point in the bike’s frame and extend past the fairings to provide some protection should the bike fall over…whether through an inadvertent no-speed dump or low side fall while riding (let’s hope none of us need to experience that). Let’s be clear, in any fallover, you’re going to have damage no matter…in the form of scrapes, break offs, or something else; sliders won’t save everything. Frame sliders act to prevent more serious damage to your bike.

For my FZ6, I did a huge amount of research, looking for the most competent set of sliders I could get my hands on. There’s a large number of styles with an even larger amount of materials used to manufacture them. Eventually, I settled on the Motivation Accessories frame sliders (here’s a good write up on them). The Motivation sliders use a high molecular density nylon that’s treated to prevent breakdown from UV rays (a common thing if you’re out riding all day). For the FZ6, they mount directly to the forward engine mounts on each side and give a very professional look. Knock on wood, but I’ve never had to test them…they just collect bugs from the windstream at the moment. If you want to see how they look:

This is the first modification I made on my bike and it has greatly increased the look and styling of the bike, in my opinion. The kit I went with is made by FAZ6, found over in the Sportbike.net forums. He custom machines the parts himself; the kit is very solid and, as I mentioned, looks great!

Here’s what my FZ6’s tail end looked like before the FE kit installation: 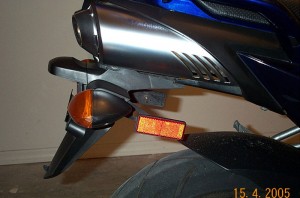 The FZ6's tail before the fender mod

And here’s what it looked like after the mod: 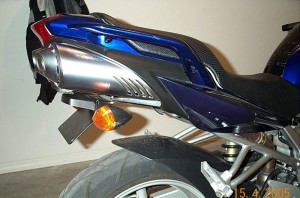 Overall, this mod was very easy to do and the end result is fantastic! For those intending to mount hard luggage on the bike, I believe when you have an FE kit, the only rack kit you can use is the Givi kit; the SW Motech kit will not work (I could be wrong, but this is my general understanding). I’ll find out later this year when I finally get my hard luggage!

It wasn’t long after getting the FZ6 that I wanted to go touring with it. The FZ6 is a competent machine for sport touring and the upright riding style makes it a comfortable choice if you can’t pull together the $10k+ for one of the dedicated sport touring machines such as an FJR1300. There are a number of different luggage options for the FZ6. One of the more popular is a set of hard luggage from manufacturers such as Givi, Kappa, Shad, and CooCase. Mounting options, that I know of, come from Givi and SW Motech…the Givi solution is rather permanent while the SW Motech mounts are removable. As mentioned in the section above for the Fender Eliminator, some of the mounting kits will NOT work with FE’s, so do your checking before jumping on a solution. The other option for luggage is that of the soft variety. Again, there are a number of popular manufacturers out there, but I ended up going with the Cortech series. I would have loved to have the hard luggage; however, a full set will run close to $1k and at the time, I didn’t have that laying around, so I opted for the Cortech set.

Here’s the Cortech set installed on my bike for my North Carolina trip (before I actually moved to North Carolina). I should point out that I’m using the duffel bag option on the top since it holds much more than the normal sport tailbag Cortech has…either one is designed to work with the saddlebags (I do have the sport tailbag also, but for this trip, I needed more space): 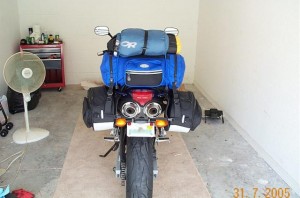 Cortech bags, all loaded up

Here’s another view from later in the trip; I have the rain cover installed on the duffel: 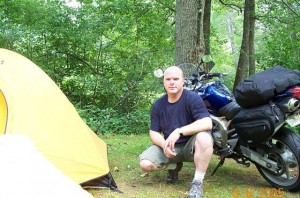 Me at TWO with Cortech bags covered with rain fly.

The Cortech bags can hold a lot of stuff and they fit very well on the FZ6. Since the stock FZ6 pipes have a heatshield, there were no issues with bag melt or anything of that nature. Mounting these bags isn’t hard, but you can easily blow hours futzing with adjustments if you’re particular that way. All of the Cortech Sport series bags come with rain covers and the saddle bags were no exception; however, I didn’t have much luck with the rain covers. I know some people have had them blow off; I didn’t have that problem, but I did have a problem with them capturing rain and pooling on the bottom of each bag leading to wet gear on the inside of each bag. The inner surface of these bags, that faces the rear tire, aren’t covered by the rain covers, so there’s an inherent chink in the water resistance of these bags. After the initial soaking some of my gear in the bags received, I simply used garbage bags as liners and was good to go after that. On a side note, the sport tailbag and duffel do not have a problem with water infiltration when properly using the rain covers.

If there is a criticism for the FZ6, it would have to lay with the stock seat. The stock seat feels fine for short rides, but as you start clocking more time, you’ll notice that the seat magically transforms itself into a hard 2×4 that’s on fire! Okay, I might be exaggerating just a bit, but that’s what it felt like for my arse. I’ve heard that some folks are perfectly happy with it…or at the very least make do with it. So, I started looking at aftermarket options for a replacement seat. There are now quite a few options available….local upholstery shops, custom jobs from Bill Mayer, Corbin, and Top Saddlery, among others. After much debate, I went with the Corbin option. I chose the Corbin Gunfigher seat with the carbon fiber look. The seat is NOT cheap by any stretch…I seem to recall it costing in the range of $450-500 at the time. It took a few weeks for mine to arrive and it was impressive right out of the box. The fit and finish on the seat was incredible! It simply fit into place without any adjustment: 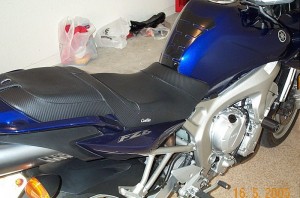 Taking the seat out for a ride showed immediate improvement over the stock saddle; however, initially, my arse still got the burning feeling after about 2 hours. We’re now 4 years down the road and I can say that the seat is well broken in and feels great. Ass burn does occur after about 4 hours in the saddle, but I think that’s pretty much the case no matter what solution you go with. That being said, it’s much more bearable than the stock seat ever was. The quality of the Corbin saddle is still like the day I pulled it out of the box; it’s seen huge amounts of rain, a lot of 2up riding, and many bags, but it still looks great!

Now, I’ve heard from the various forums I peruse that the seat from Top Saddlery has emerged as the most comfortable FZ6 seat. They’re a French manufacturer and, from what I’ve seen, there have been zero negative comments about their seat. There’s even talk about it besting the Corbin in terms of comfort. I don’t know, but I liked the Corbin!